Information about and adventures on a Montgomery 17

The electrical system components finally arrived and I have completed the second upgrade to Sweet Pea’s electrical system.  The first upgrade was done in 2010. She now how a solar panel, USB chargers, a second 12V port, stern light, new masthead light and a safer electrical panel.

The distribution panel remains the one that Jerry’s staff installed in 1983 – not at all up to current standards.  I replaced all the wires, including new battery leads, and put fuses on the switches.  There is now a negative bus bar – as Jerry’s staff just attached all the negative leads to one of the bolts holding the panel to the bulkhead!

I now have USB charging ports, including one that is capable of providing 5 amps of continuous power (most are limited to 2 amps), and a digital 12V meter.  There is also a second 12V port. 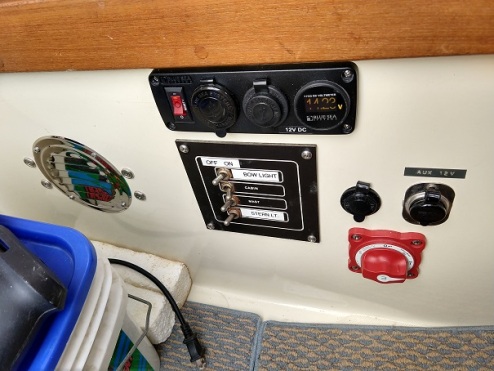 The electrical system after the first, 2010, upgrade.

The new components are made by Blue Sea Systems.  The wire and connectors are by Ancor.

To charge the battery during my extended trip, as I don’t plan on staying (paying) in many marinas, I installed the largest panel I could fit on the forward cabin hatch – a 30W unit.  The panel is routed to a charge controller and then to the battery.  The manufacturer rates the panel at 1.7 amps.  In a full sun, at noon-ish, testing I got 2.1 amps (unregulated).

A new masthead light has been installed.  It is LED and is rated 2nm.  When it is on the voltmeter barely registers the power use!

The stern light is an inexpensive unit having a incandescent bulb.  I may purchase a LED replacement – though this will be more expensive than the entire fixture!

The complete installation took me about eight hours over three days.  Both the solar panel and the stern light required making holes in the boat so I used epoxy resin to seal the forward hatch’s and transom’s balsa core.  I allowed the epoxy to set overnight before continuing the component installations.

I’ll be reporting on how the system works, especially the solar panel, during my upcoming multi-month cruise of the Salish Sea … so ‘watch this space’ for updates!

One thought on “Upgraded electrical system”